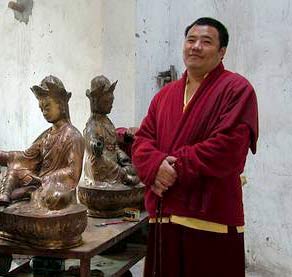 The previous Ahzom Losel Rinpoche was the disciple of the great Nyingma Master Ahzom Gyaltse Rinpoche from Ahzom Monastery. Ahzom Losel Rinpoche was considered a highly accomplished Vajra Master. He was renowned for his prominent Vajrayana practices and distinguished contribution in the dissemination of the Buddha’s Teachings through establishing Dharma Centre in Shanghai in 1930s. In late 1960s, witnessed by many other rinpoche, he sat in Vajra posture and floated one foot above the ground and peacefully reaching Nirvana.

Since his childhood, Sonam Rinpoche had shown his renunciation mind and his outstanding performance in studies. At the age of six, Rinpoche learned the Tibetan language from his father, Yonten Tharshin. At the age of ten, he was robed as a monk at the Ahzom Monastery, Tibet.

Sonam Rinpoche started his dharma education from Dzogchen Innermost Essence Preliminary Text and systematically obtained all the Dzogchen Teachings and initiations from his guru, H.H Yidjin Drukpa Rinpoche for 10 years. At the same time, Rinpoche learned the Bindu teaching and practice from Ahzom lineage holder, H.H Jamga Rinpoche; The Tantric and Nangwa Lhadub from Khenchen Choechab; Buddhism Views from Khenchen Jigmed Phuntsok Jongne as well as other cultural studies from other famous Khenpos. 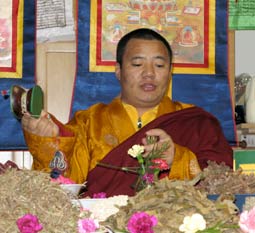 Rinpoche later pursued higher Buddhist philosophy in India under the guidance of H.H Penor Rinpoche and received the Rinchen Terzod empowerment from His Holiness. For another eight years, Rinpoche studied at the Buddhism Institute of Nyingma and systematically completed and mastered the teaching of Mahayana and Vajrayana. During his college study, Rinpoche showed his excellent Buddhist scriptural knowledge by presenting a long discourse on Sangwa Nyingpo (Magical Net Tantra, a Mahayoga Teaching) in front of H. H the Fourteenth Dalai Lama and H.H Penor Rinpoche together with 30,000 sanghas. He also gave the explanation and debate on the subjects namely the Illusory Manifestation of Secretly Essence and The True Face of The Nature. H.H Dalai Lama complimented his wisdom and encouraging him to continuously uphold and propagating the Buddha’s Teachings for the benefits of all the sentient beings. With his remarkable accomplishment in the Buddhist studies and practices, not only Rinpoche has persistently contributed in the spread of Buddha Dharma from time to time, through giving teaching of Buddhist philosophy and conducted initiations and oral transmissions for disciples, Rinpoche has also written a few books, including The New Light of Philosophy.